Israel to the Palestinians: submit, leave or die

Israel to the Palestinians: submit, leave or die 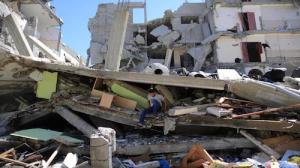 By Jeff Halper
US Secretary of State John Kerry’s initiative may have ended with a whimper instead of a bang, but its impact on the Israeli-Palestinian conflict was significant and fundamental nonetheless.
The end of the political process, futile as it may have been, triggered the collapse of the status quo as we have known it for the past 47 years. It set in motion a series of events that will confront us with two stark alternatives regarding Israel and Palestine: either the permanent warehousing of an entire population or the emergence of a single democratic state.

From the start, in 1967, successive Israeli governments officially denied that there even was an occupation, claiming that since the Palestinians had never had a state of their own they had no national claim to the land. The Labour Party denied the very applicability of the Fourth Geneva Convention that protects civilian populations finding themselves under hostile rule with no means of self-defence – and which had been formulated specifically with the intent of providing the protection denied to Jews during the holocaust. It therefore embarked on a project of establishing settlements, now numbering some 200, in clear violation of international law that prohibits an occupying power from moving its civilian population into an occupied territory.
Indeed, Labour (the “Zionist left”) bears more responsibility for eliminating the two-state solution than does the Likud of Menachem Begin, Ariel Sharon and Binyamin Netanyahu. It was Labour which ruled during almost all seven years of the Oslo peace process, and it was Labour that chose to double Israel’s settler population during that period. Labour fragmented the Palestinian territories into tiny and impoverished enclaves, Labour imposed the economic closure and impediments to Palestinian movement these last 21 years, and Labour – not Likud, which actually opposed the project – initiated the construction of the Separation Barrier, the Apartheid Wall.
The Likud, of course, was a willing partner, as were all the secular and religious parties from the centre to the extreme right, but it has fallen to Netanyahu to kill the two-state solution for once and for all. The first step was to decisively end Kerry’s initiative and any that might follow it. This Netanyahu did by raising his demands to intolerable levels. He declared that the Palestinians must relinquish their own national narrative and civil rights by recognizing Israel as a Jewish state, and he held to the position that Israel would retain permanently East Jerusalem, the Jordan Valley and Israel’s main settlement blocs (about a third of the West Bank), as well as the water and natural gas resources, the country’s electro-magnetic sphere (communications) and all of its airspace.
He left the Palestinians with less than a Bantustan, non-viable and non-sovereign, a prison comprised of the 70 islands of Areas A and B of the West Bank, ghettos in “East” Jerusalem, tightly contained enclaves within Israel, and the cage which is Gaza – half the population of the land between the Mediterranean and the Jordan River confined to dozens of islands on 15 per cent of historic Palestine.

A clear, unilateral and final message