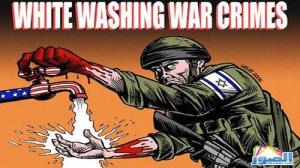 After the Israeli settlers went missing, Binyamin Netanyahu was paraded on Sunday TV news blaming the new Palestinian government for an incident in area A which is under his full military control.
On the following Sunday it was Israeli ambassador Ron Dermer’s turn on US news programmes, whitewashing Israeli brutality with blatant lies unquestioned by his American media hosts.
“A murder is a murder is a murder, whether it’s a Jew or an Arab,” Dermer claimed on TV. But, of course, the news reporter did not ask the ambassador why Jews and non-Jews don’t pay equally for the “murder”.
For example, Israel demolished the homes of two Palestinians suspected of kidnapping the illegal settlers, but not those of the Jews who actually confessed to murdering the Palestinian child.
Referring to the Jewish killers, Dermer declared on another programme: “There will not be public squares named after them.” In this case Dermer might be right, since murdering only one Palestinian is not worthy of such recognition.
For Dermer must be aware of the pilgrimage shrine built for Jewish terrorist Baruch Goldstein who in 1994 massacred 29 Palestinian worshipers inside a Hebron mosque. Or of the square in Jerusalem that is named after Jewish American spy Jonathan Pollard.
The handling of the tortured and burned Palestinian child sheds more light on Israeli racism, but equally important is that it exposes the complicity of US media as a favourite outlet for unchecked Zionist lies to cover up Israeli crimes.
A version of this article was first published by the Gulf Daily News newspaper. The version here is published by permission of Jamal Kanj.
Posted by Fotograf Abigail at 10:51 PM