Witness to a shelling: first-hand account of deadly strike on Gaza port

There is a deafening explosion, then a second. Four children are dead. Four survivors reach the safety of our hotel 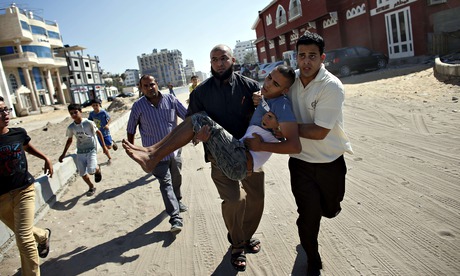 Palestinian employees of al-Deira hotel carry a wounded boy following an Israeli military strike on the beach in Gaza. Photograph: Thomas Coex/AFP/Getty Images
The retaining wall of Gaza's harbour sticks out into the Mediterranean about 100 metres from the terrace of al-Deira hotel, base to many of the journalists covering the conflict in Gaza. The first of the artillery shells came in a little after 4pm on Wednesday as I was writing on the hotel's terrace.
There is a deafening explosion as it hits a structure on the pier, a place we have seen hit before, where fishermen usually store their nets. Behind the smoke, I see four figures running, silhouettes whose legs are pumping raggedly. They clear the smoke. From their size it is clear they are a man and three young boys.
Where the harbour wall ends and the beach starts, there are a few brightly coloured tents and chairs for beach users in more peaceful times. The four figures jump on to the beach and begin running towards us and the safety of the hotel.
Only afterwards do we discover there are four others who are dead, all children, lying on the wall. I am shown a picture of one of the dead boys, his skin scorched and bruised. Their names are released later: Ahed Bakr, aged 10; Zakaria, 10; and two other boys from the Bakr family, both named Mohammad, aged 11 and nine.
The second shell catches the survivors as they reach the brightly coloured tents. As it explodes, my colleagues, now standing by the terrace wall, shout at unseen Israeli gunners who can't hear them: "They are only children."
The man makes it to the terrace first, scrambling up a steep sandy bank. A skinny man in his 30s, he groans and holds up a T-shirt already staining red with blood where he has been hit in the stomach. He faints, and as he grows pale and limp he is carried to a taxi waved down in the street.
The children are brought up next. Pulling up the T-shirt of the first boy, who looks about eight years old, we find a shrapnel hole, small and round as a pencil head, where he has been hit in the chest over the second rib. Another boy, a brother or cousin, who is uninjured, slumps by the wall of the terrace, weeping by his side.
The boy cries in pain as we clean and dress the wound, wrapping a field dressing around his chest, pressing to staunch the bleeding. He winces in pain, and he is clearly embarrassed too as a colleague checks his shorts to look for unseen femoral bleeding.
A waiter grabs a table cloth to use as a stretcher, but a photographer takes the boy in his arms to carry him to the ambulance that has arrived.
Other colleagues work on the final surviving casualty, an older boy. His arms are scuffed, and a bandage around his head barely staunches a head wound. He too is quickly carried to the ambulance.
In less than 10 minutes it is over. Even the smoke on the pier has died away, save for a last few drifting wisps.
Posted by Fotograf Abigail at 5:36 PM