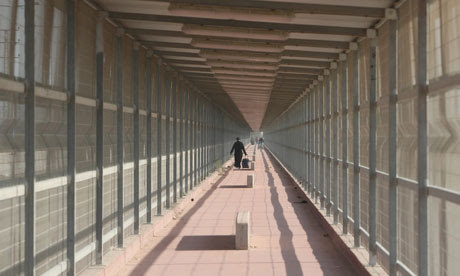 The Erez crossing at the northern end of the Gaza Strip. Israel insists rigorous security checks have proved to be essential. Photograph: Mahmud Hams/AFP/Getty Images
Palestinian patients and business people hoping to leave the Gaza Strip are being asked to collaborate with Israel in exchange for an exit permit, a leading Israeli human rights organisation claims.
Physicians for Human Rights (PHR) say that 172 people, mostly men aged 18 to 40, were called for interrogation by the Shabak, Israel's internal intelligence agency, last month. Some who attended interviews were granted exit permits.
Three years on from Operation Cast Lead, Israeli informers play a critical role in monitoring militant cells in the Gaza Strip. Senior sources within the Israeli Defence Forces say a ground operation is more likely now than at any point since the December 2008 offensive. As tensions simmer, collaborators are an invaluable resource.
"The more intelligence you have and the greater the local perception is that you know what is going on, the more Hamas will delay and avoid acts of provocation that may lead to a ground operation by Israel," said Gabi Siboni, director of the military and strategic affairs programme at Israel's Institute for National Security Studies.
The problem for Ahmad Hamada, 20, is that he has no intelligence to give. Hamada fell from a four-metre high wall earlier this year and suffered serious head injuries, including memory loss. Damage caused by a catheter used during his recuperation means his urethra no longer functions properly.
As doctors in Gaza could not solve the problem, Hamada's father, Emad, arranged for him to receive treatment in Israel. He had worked there as a labourer for years and was stunned when a week before the appointment, the 20-year-old was summoned for an interview with the Shabak on 19 September. He was led to an interrogation room deep beneath the Erez crossing terminal where an Israeli officer introduced himself in Arabic. Littering his conversation with Gaza slang, he asked briefly about Hamada's medical condition.
"I know everything," he warned him. "You didn't fall off a wall did you? Why are all those tubes inside you? Tell me the truth. Is your father Hamas? Who is Hamas in the port? Who in your neighbourhood?"
"He became very angry when I kept answering that I didn't know," Hamada recalled. "I explained I couldn't remember much since my fall. I was in pain and I just wanted to go home."
After an hour of questioning, Hamada was left alone in a locked interview room. The entire process had lasted four hours and he needed the toilet. As his knocks and calls went unanswered, he was forced to pee on the carpet.
Hamada was eventually sent home and told he would be called for a second interview. He has not heard from them again but says he will refuse to go if they call. He now has a referral for treatment in Egypt but hasn't gone due to the turmoil there.
Israel insists rigorous security checks have been proved essential. The Shabak website provides eight examples of medical patients from the Gaza Strip who attempted suicide attacks once inside Israel. All of these attempts were made before 2007, when Israel sealed its borders with the Gaza Strip.
Kfah Abd El Halim, who runs PHR in the West Bank and Gaza, counters that the manipulation of medical patients violates a basic right to healthcare: "It puts the lives of patients in danger while forcing them to choose one of two impossible options – risk their chances for getting medical care or risk their lives for getting suspected of collaborating with the Israeli security forces."
It is Hamas policy to execute collaborators but businessmen have their economic survival to consider. To date, 60% of Gaza's businesses have gone under.
Ramez Kaloub imports dairy products to Gaza and his revenue has halved since the blockade was imposed in 2007. In January this year, he was asked by Israeli corporate giant Strauss to meet in Israel for a deal that could make up his losses.
Kaloub had accompanied his nephew for medical treatment in Israel nine months before so didn't think getting a permit would be a problem. But this time, he was called for an interview.
"After trying to speak with me about Hamas the officer said he would like to help me but I have a black spot on my security record. We could sort this out at a meeting in Jerusalem, he said.
"I said no, I would prefer to sort out any problems now."
Kaloub was sent back to Gaza and his request to enter Israel declined. A competitor won the Strauss contract. His case has now been taken up by Gisha, an Israeli organisation campaigning for freedom of movement for Palestinians.
"It's possible other businessmen would give intelligence to Israel," he says. "While the majority will say no, there be those who will have no choice."
World news | The Guardian
Posted by Fotograf Abigail at 12:46 AM